Hi from London! We’re on a quick trip to one of our all-time favorite places, this time, to see as my husband insists I call them …”The World Champion Philadelphia Eagles” win in the UK. The NFL is on a quest to create a stronghold in Europe, so who could resist a 90 minute flight for some Americana. We are also took the much lauded Harry Potter studio tour ⚡️

Back to our recent travel catch-up! In September, my husband had mini work trips to a few different spots in Switzerland. Eager to see as much of this beautiful country as possible, I was happy to tag along and enjoy more of Switzerland’s flawless train travel. Today, a quick revisit to Zurich and Bern, and next, Basel!

We returned to Zurich and went back to our old favorite, Zeughauskeller, for brats and rosti. It was lovely to see the city in it’s full summer glory, in stark contrast to our first visit! We were there for just under 24 hours, and I spent most of it reading in beautiful Lindenhof park on one of those perfect early fall afternoons. I was joined by dozens of students, couples, and a bunch of teenage boys drinking cheap beer and racing each other in a sprint relay. See, really some things are universal. Check out the link for recommendations of eat/stay/play in Zurich! 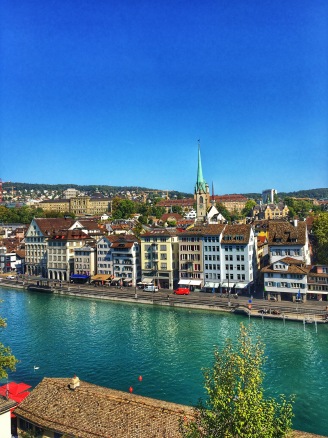 From Zurich we were back on the train to Bern for dinner at Kornhauskeller, which as it sounds, is quite literally the beautiful cellar of of the old cornhouse in the center of town. It’s a bit expensive, but delicious and a lovely atmosphere.

Bern means “Bear” in German and bears feature prominently in their cantonal flag and hide in decoration throughout the city.

The next morning, I signed up for a walking tour – unfortunately, the daily free walk had ended for the season, so I paid 20 CHF to the Bern Tourism Office for a perfectly fine, but not at all special tour of the Old Town. The charisma of a tour guide can really make or break the experience! We were also sure to visit a Bern landmark, the Zytglogge clock.

Dates conflict, but the most popular seems to be that it was built in the 13th century and claims to be the oldest working medieval clock in the world. Each hour it tolls, the mechanical figures dance and the astronomical clock face moves in a happy little spectacle with a song.

It’s said that Albert Einstein, who spent much time in Bern and developed his theory of relativity there, was actually inspired by the clock while recognizing that of course time is relative.

Bern is a “city of fountains” – it has more than 100! During the Renaissance, in an effort to encourage Bern’s prominence as a rising city, 12 colorful ones sharing parables were built. 11 are still active today.

Switzerland’s government is a bit hard to explain because it is primarily run regionally – at the cantonal level (sort of like a state.) In 1848 Bern did become the “capital” and on a federal level, it is run by a Parliament and a rotating board of leaders – sort of like a corporate board. They have no security, all take public transit, and you could approach any of them on the train at any time to chat. I haven’t met a Swiss person who knows which one is “in charge” right now – everything that matters to most people happens locally!  That said – the gorgeous federal building is in town and Bern is often a diplomatic hot spot.

In the afternoon, I climbed the largest church tower in Switzerland, the Swiss reformed Münsterkirche. Much like Geneva’s St. Pierre Cathedral, it was built as a Catholic cathedral, and was revolutionized by the vast Reformation in Switzerland. That means it was a bit more sparse than your typical Catholic Cathedral but still a lovely building – and great cardio. 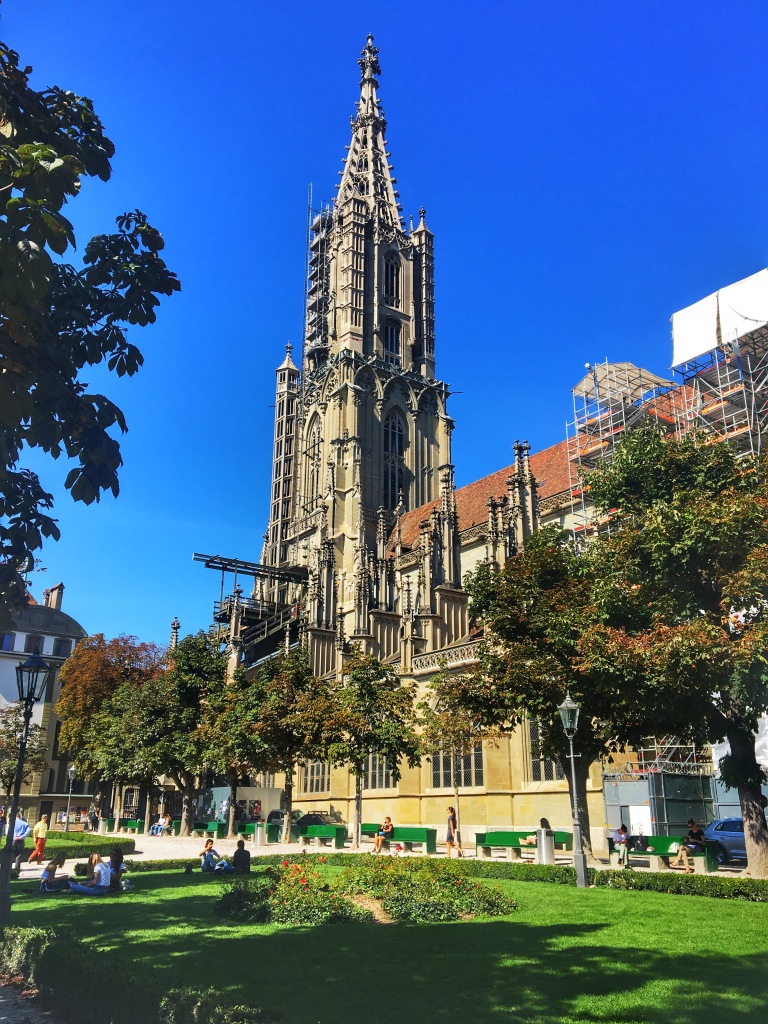 That evening, we went to craft beer bar Barbiére with fellow American expats living in Bern. It was really great Brooklyn-esque spot, which we followed by dinner at the local Lötschberg. It was complete with a “all you can eat raclette” – my husband managed 8 plates.

The next morning, I hiked up to the Rose Garden and overlooked this charming city. You can also have a seat with Albert Einstein – his presence really does permeate the city. 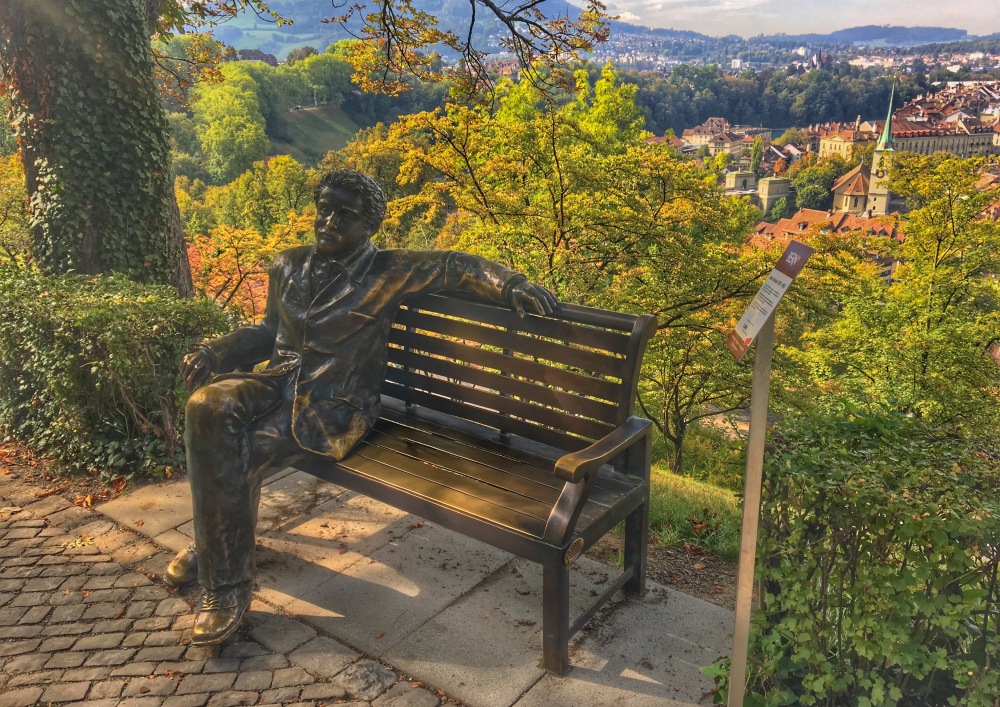 The area surrounding Bern is called the “Bernese Oberland” – the home region of Lauterbrunnen, Interlaken, and Grindelwald, and on a clear day, you can see the Jungfrau mountain range. 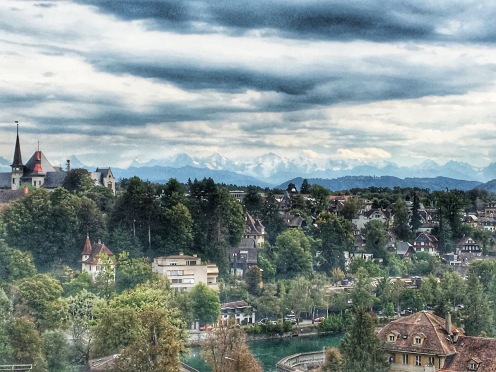 Can you spot the Mountain Range? 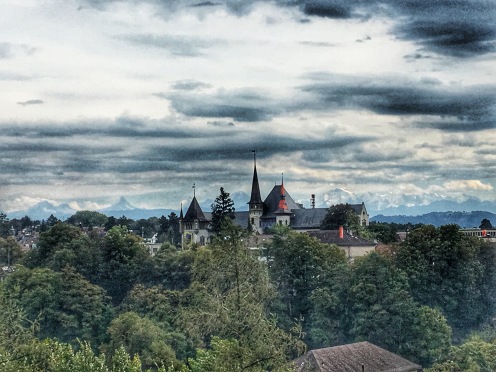 Lastly, I would be loathe not to mention that I enjoyed my first “Dunkin” abroad! Bern is the first and only place I have seen a Dunkin in Switzerland. I spotted one in Amsterdam but it was 11:30pm and not even I could justify a late night latte. Bern’s donuts were 3.40 CHF each (around $3.50 USD!) so I skipped them, and the iced coffee was mostly milk, but it was still a great moment for this New England girl.

Bern was a great place for a fall visit and I’m so glad we came! If you have limited time in Switzerland, I wouldn’t say you absolutely must get here – but if you have a longer stay, it’s a charming and totally gorgeous city certainly worth seeing! 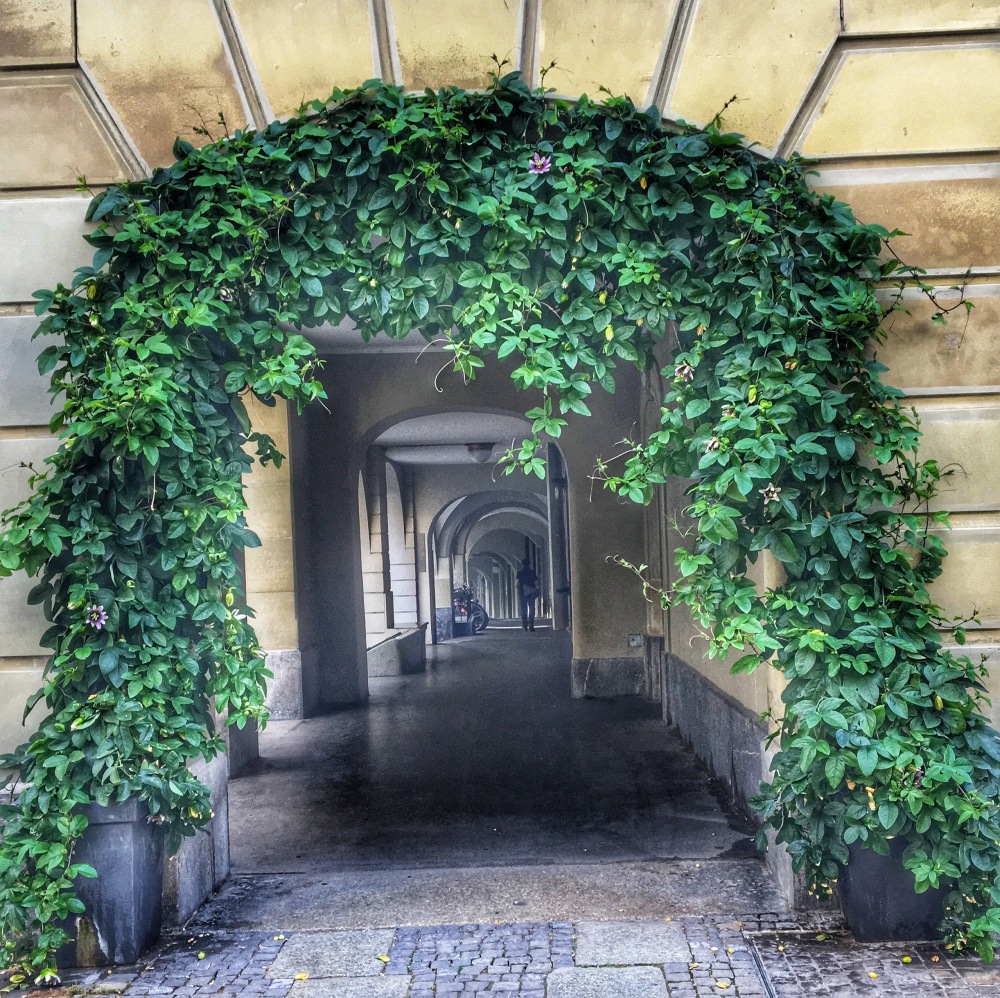 Last up on our Swiss City roundup was the northwestern city of Basel – home to Roger Federer, a bright red town hall, and the Pope’s favorite Christmas store.

THANKS AS ALWAYS FOR READING – AND LET ME KNOW WHERE WE SHOULD VISIT NEXT!