Off the bat, to eliminate confusion – Luzern and Lucerne are the same place! Like in the Bruges vs. Brugges dilemma, Luzern is the German spelling, Lucerne is the English spelling. The British historically love Switzerland (there were so many British accents in Zermatt!) and also this region- Queen Victoria herself visited!

I had a weirdly awesome late night ratatouille with great service at the lakeside Brasserie Bodu after the Swiss beat Serbia in a nail-biting World Cup game, and washed it down with Luzern local Eichhof.

We stayed in this easy and functional AirBnb right on the river, near the Chapel Bridge, and walkable from the train station.

Take photos at the Chapel Bridge, visit the Lion Monument, get cozy at the lakeside, and above all, take the Golden Roundtrip to the top of Mount Pilatus [~50 CHF with a Swiss Pass half-fare card … we don’t always say this in Switzerland, but the experience was probably worth triple!]

A few weeks ago, we attended a training in Zurich with my husband’s firm about immersing into Swiss culture. It was incredibly helpful and I will be posting about some interesting lessons we learned shortly!

Because our train tickets were paid for to and from Geneva, with our dear friend C, we tacked on a stop in Luzern, often called Switzerland’s most beautiful city.

We arrived on a Friday evening, threw our stuff down, and headed out for drinks on the river. It was gorgeous! 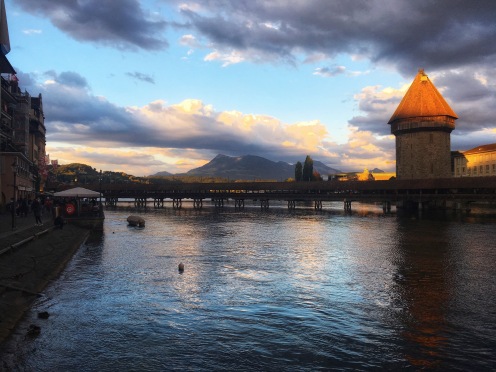 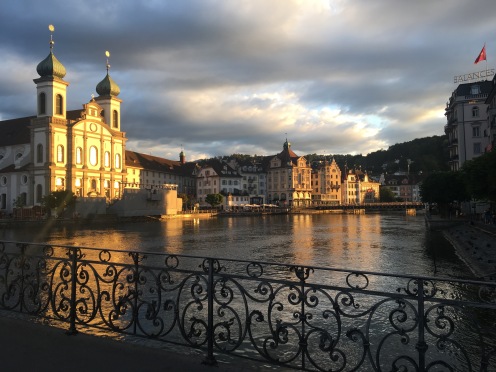 Eager for a place to watch the World Cup, we asked our waitress for a recommendation and she pointed us to a spot around the corner which had outdoor TV screens.

It was a few days short of the 4th of July, but hot dogs somehow came into the picture.

We watched the first half of the game and were sort of surprised to see the spot we were at was relatively quiet. Eager to join in the revelry (my husband and C are from Philly after all) which we knew even the reserved Swiss would be enthusiastic about their game and decided to abandon the hot dogs for greener pastures. We made our way to a large hotel open to spectators for the second half and cheered along with the crowds as Switzerland won in the 89th minute! They have since been eliminated, but had a great run!

The next morning, we slept in and took photos on Luzern’s iconic Chapel Bridge – “Kapellbrücke” in German. It is a a wooden pedestrian bridge that was built in 1333 and is said to be the oldest covered bridge in Europe. As you walk the bridge, you can see paintings celebrating Luzern’s long history. Sadly, in 1993, a fire likely from a tossed cigarette broke out and destroyed more than two-thirds of these paintings. Many have been restored but there are still gaping holes in such an important historic monument. Nevertheless, it remains a hallmark of this special city and the ultimate photo-op. Brief commercial break for a quick shoot! 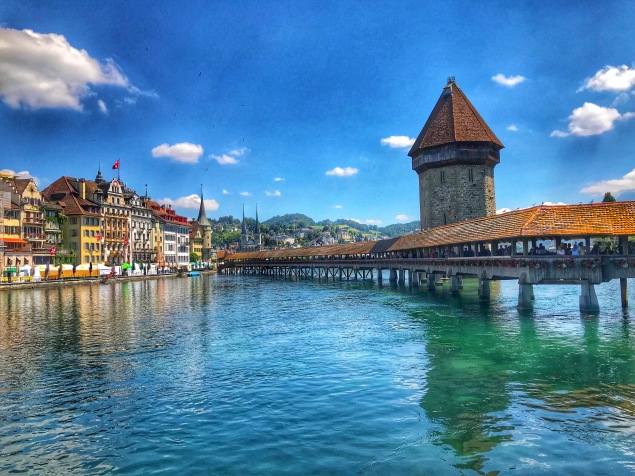 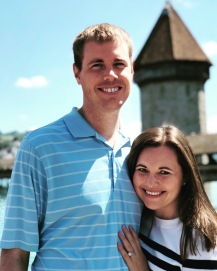 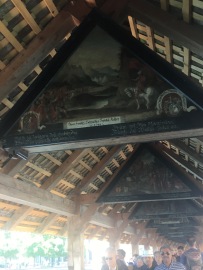 bad picture of the paintings

look at that water!

Next, visited the Lion Monument. The dying, and crying, brave lion was sculpted in 1821 to honor the fallen Swiss guardsmen who died in 1792 during the French Revolution. Why in the French Revolution? It might be surprising if you know how steadfastly neutral Switzerland is determined to be- they haven’t fought a war since a brief internal war in 1847. But back in the old days, Swiss mercenaries, then known to be the most feared troops in Europe, were often contracted out to royals in Europe to do their fighting for them. Now, mostly they just keep an eye on the Pope! The Latin inscription on the monument “Helvetiorum Fidei Ac Virtuti” means “to the loyalty and bravery of the Swiss.” Mark Twain described the Lion of Luzern as the saddest and most moving piece of rock in the world. 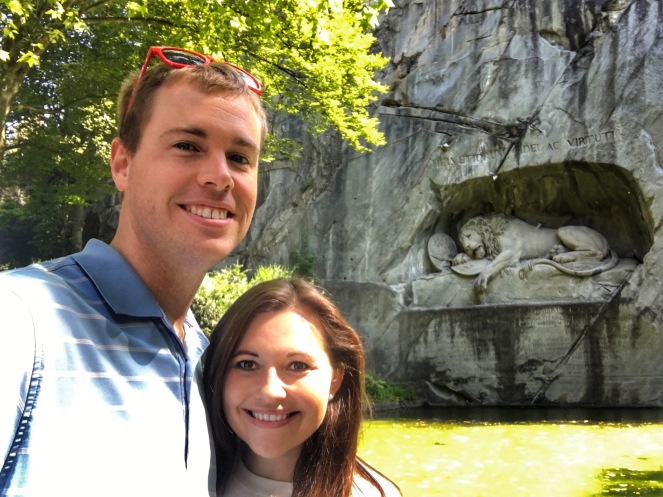 We also briefly popped in the Church of St. Leodegar, a really beautiful and ornate Catholic Church built in the 1630’s – which is unusual for us in Geneva, used to the stark nature of Protestant churches.

We had heard good things about Mount Pilatus, and we had gotten a little overconfident from our ventures in Lauterbrunnen and Saleve that we could certainly climb it. I also did a little less research for this weekend than I normally would, and we quickly found out it was a 10 hour hike up the mountain, for experienced hikers. Instead, we did the Golden Roundtrip .

It was the perfect route – an hour or so boat ride … 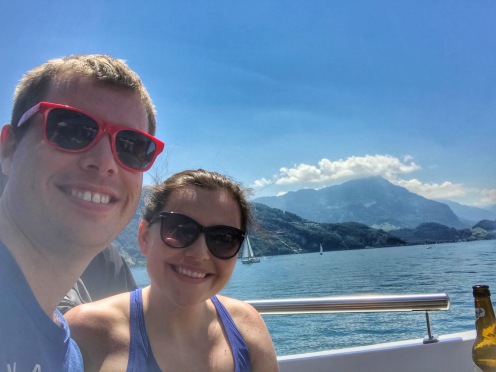 and then a 40 minute train trip (the steepest  cogwheel train in the world) to the top of the mountain.

Mount Pilatus is a place of myth – some say that the body of Pontius Pilate was tossed in a lake at the top, giving it its name, and they really lean into the myth of a mystical, healing dragon who once lived on its peaks. We took a short hike around the top, had a little cozy blanket-full happy hour… 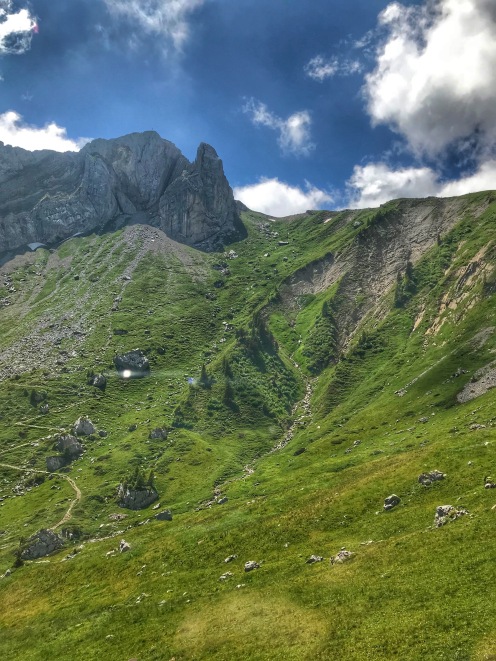 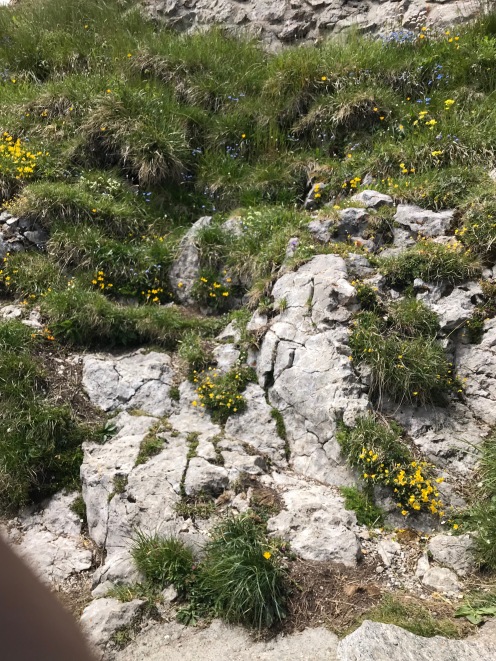 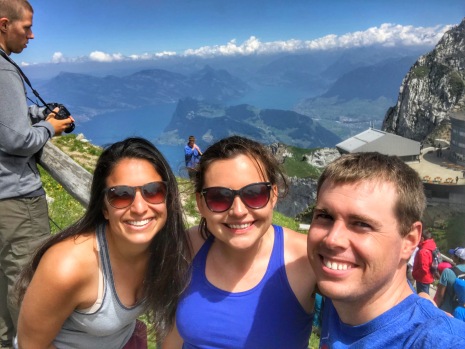 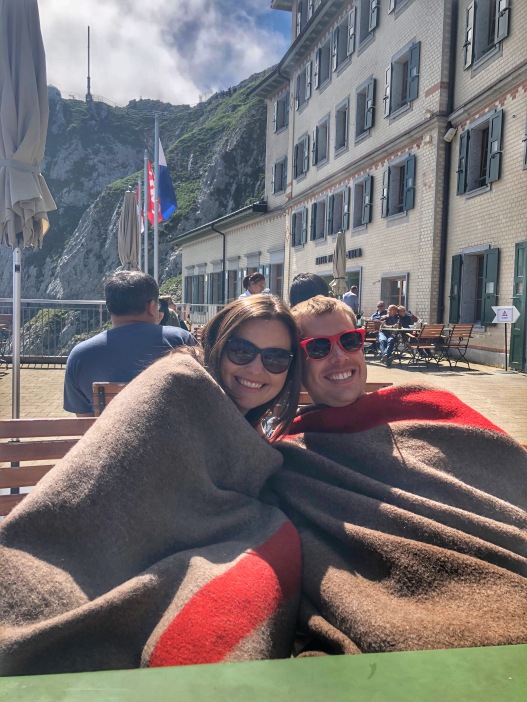 and then took a gondola and a bus back to the city.

The views were incredibly breathtaking.

It’s a great summer spot but we would happily visit in winter, it apparently has the best toboggan route around!

If you follow along on Instagram, you saw we were witness to a real Ricola commercial with a musician playing an alpine horn. It does not get more Swiss than this!

Fairly early the next morning, we boarded a pretty early train back to Geneva (about 3 hours) to get ourselves rested and organized for the week. We couldn’t recommend a trip to Luzern more – such a special spot for a restorative weekend away, and also perfect for adventure-seekers to visit Pilatus! This trip also feels really special because right around that last beer on Pilatus, I had a feeling I might be pregnant – and we welcomed James the following March.

Hope you are still enjoying an extended wonderful 4th of July celebration in the USA!

Next week, my friend K comes to Geneva for a quick visit, and next weekend we are back in Philly for a week for our last time of the year to celebrate a  VIP family wedding!

In August, we have Northern Ireland and Amsterdam coming up – followed by a visit from my sister (!!!) and trips to Greece and Paris in September. In October, we are going to take a brief personal travel break I am finally going to get into my French immersion class.