We had all the mussels and fries one could eat at Le Marmiton in the Galeries Royales Saint-Hubert and Chez Leon on the bustling Rue des Bouchers, enjoyed incredible chocolate at a variety of local shops, and naturally, brought it all home at Delirium on Friday night (more than 3000 beers) and at a plethora of bars on our tour [keep reading for specific chocolatiers and bars ⤵)

With a coffee, do try a “speculoos” – a Belgian spiced gingerbread cookie. If you have ever eaten Trader Joe’s Cookie Butter 🙋🏻‍♀️🤦🏻‍♀️ or eaten a Biscoff cookie often passed out on Delta, you will recognize the taste!

We broke up our trip with a night in Bruges and as a result stayed in two different Marriotts – the very well appointed Hotel Grand Place (which put Biscoff cookies on our pillows!) and the modern and friendly Courtyard near the European Union. While changing hotels can be inconvenient, it was fun to see the different personalities of Brussels – the refined, diplomatic section surrounded by embassies, and the bar scene – all in the same weekend!

Copenhagen might be the most playful so far, but Brussels knows how to party, and not just at Delirium . We loved the Beer & Chocolate Tour that we did through “The Brussels Journey ” – our charming guide Batiste took our tour group  through four chocolate shops and four bars where we tried the gauntlet of Belgian style beers. Specific bar recommendations are below.

I am sort of prone to flight delays and cancellations, so when possible, I always try to fly direct. However – our trip to Brussels last Friday was my third time in it’s airport – having connected on my way home from our trip to Budapest, and  Copenhagen.

So, last Friday afternoon when we boarded for the hour EasyJet flight to Brussels, I was very excited to get out of the airport and soak up the city! My husband, like most yuppie millennial white guys, is really passionate about beer, so he was over the moon about a weekend inhaling his favorite sour ales and moules and frites (mussels and fries – you cannot call them “French fries” to a Belgian – they claim to have invented them) with lots of mayo and ketchup. It’s so important to be a supportive spouse 😉, so he was not alone in this epic quest!

After getting off the airport train to Central Station, we walked through La Grand Place (another UNESCO Heritage Site) to check in and “ooh” and “ahh” in the square for a bit – and to get our first “walking frites.”

La Grand-Place is a combination of the Hôtel de Ville (City Hall), and 40+ old guild buildings (much like in my Zürich post!), and the Maison du Roi (the Brussels Museum – didn’t make it there!) – its variety of architecture also speaks to the fact that Brussels boasts its diversity, claiming to have the most expats in all of Europe. Due to the European Union naturally! 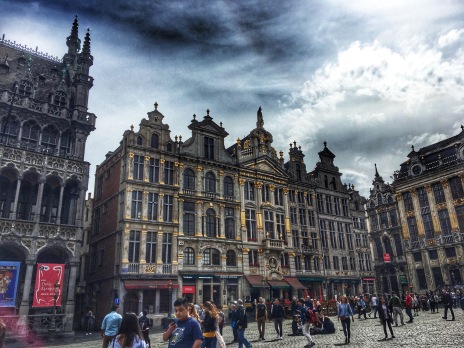 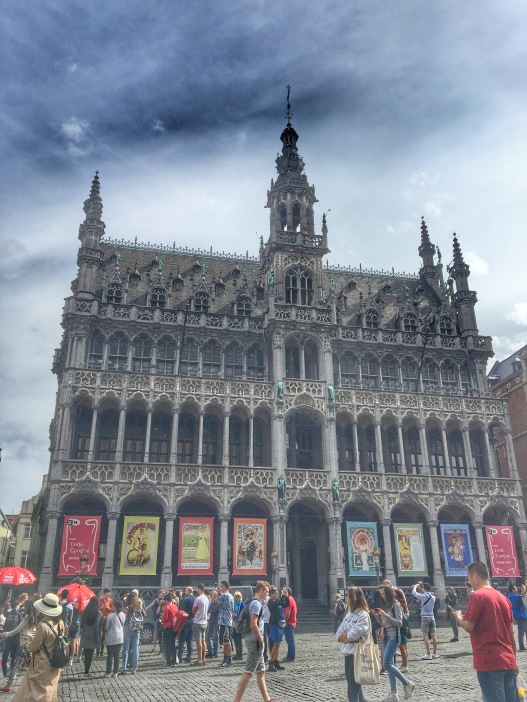 Off a recommendation from my husband’s colleague, we went for moules and frites and Flemish beef stew at Le Marmiton . It was located in the beautiful Galeries Royales Saint-Hubert– really just a mall, but a gorgeous one! 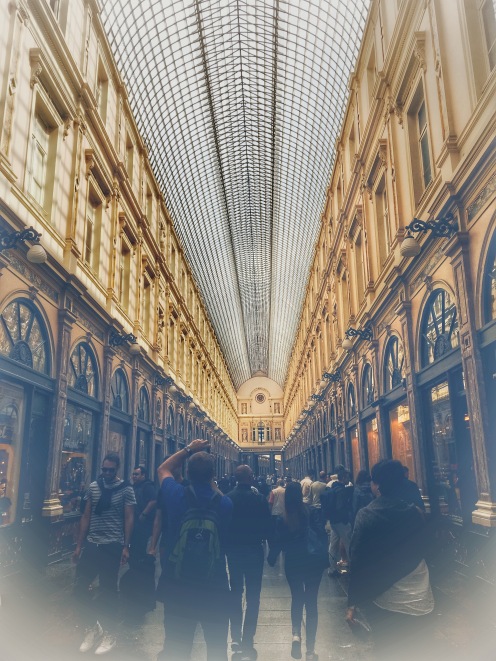 Following dinner, we walked down the Rue des Bouchers and came down the “Delirium Alley” of all Delirium hot spots. We had a blast watching the Spain vs. Portugal World Cup match (a 3-3 tie) with folks from all over the world.

The next morning, we had a quick waffle…. (promise I will share more about waffles in our next post – this one is already so jam packed!)

and took the train to Bruges (post on its way) but we returned on Sunday afternoon! After checking into the EU, we visited Cathedral of St. Michael and St. Gudula – the patron saints of the city of Brussels. The Gothic exterior reminds me of Notre Dame in Paris and the interior is composed of many Baroque pieces, woodworking, stain glass and marble. It’s roots go back to the 9th century and it is the site of the country’s royal weddings and funerals. 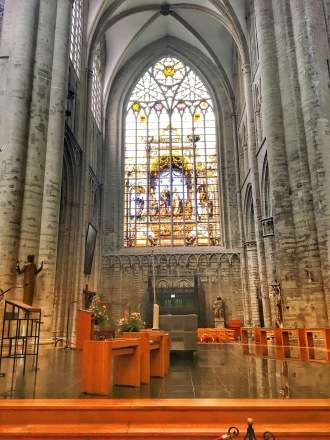 After visiting, we joined our tour guide Batiste for our Beer & Chocolate Tour.

One of my favorite ways to get to know a city is to do a food tour. As late and truly great Anthony Bourdain evangelized throughout his too short life- a culture’s food is the most accessible entree into conversation, and breeds mutual understanding. Local food inherently shares how an area spends their time, how their history shapes their “today,” and what matters to them and their families.

Lest I mislead anyone into thinking it is solely a noble enterprise, I also just really love to eat and get restaurant and bar recommendations from native guides. And it’s a great way to meet fellow travelers and swap tips!

The tour, at 80 Euro a person felt initially too expensive, but with thousands of positive reviews all over the Internet, felt like a worthwhile gamble – and it really paid off. Batiste, a native Belgian, toured us on a four hour walk around town with stops at four favorite chocolatiers first, followed by four cozy Brussels pubs.

Before we “cheat” on Swiss chocolate – it is still our favorite  milk chocolate! Because of the high quality dairy in Switzerland, I have heard it said that the focus . Our first top, Chocopolis, made me nervous because we were on a very crowded street full of souvenir vendors. Over the years and after some subpar meals at “tourist traps” – my snobby meter tends to go off that there must be a better spot around the corner. However, we found in Brussels, that “travel indicator” of “get off the beaten path” doesn’t always hold water.

Chocopolis is a “confiserie” – or a confectioner, a chocolatier who doesn’t individually source cocoa beans but purchases them to produce chocolate. Their owner is lactose intolerant so all their chocolate is produced with coconut milk – which makes it vegan! The most memorable bite was one with salt and cayenne pepper.
The next spot, in contrast to Chocopolis, Frederic Blondeel is a “bean to bar” producer and is quite distinguished – Batiste told us  that they are the official chocolate supplier of the royal family, and it was recently visited by the crown prince of Belgium ! We tried a really interesting basil piece, as well as one with lemongrass and ginger, followed up with a salted caramel of course.
Belgium is a constitutional monarchy but unlike some of its neighbors, it’s royal family is not at all a subject of fascination to their subjects. Batiste also told us the variety of ways Belgium can be a bit backward – for example, its government was closed for more than 500 days in 2010-2011 due to a dispute between the Dutch (and Flemish) speaking North and the French speaking South.
It’s not entirely surprising for a country who’s Supreme Court, the Palais de Justice, once considered a wonder of the world, has been under scaffolding since 1982. Batiste told us no insurance company in the country is willing to back any project which would involve workers on 30+ year old scaffolding. Crazy! So much so I didn’t even waste iCloud space to take a photo!
Before our next stop, Batiste shared with us that the process of becoming a chocolatier in Belgium is to first attend five years of pastry school, and then to spend as many years as possible studying as an apprentice of an existing chocolatier. Pierre Marcolini, now a food celebrity in Belgium, was working as an apprentice and encouraged his boss to treat their product like a fashion brand. The boss laughed him off, and Pierre, now a fixture on the European social circuit, opened the “Chanel of Chocolate” flagship store across the street.
It’s a true fashion house of beautifully merchandised product that is launched in “seasons” and “lines,” like clothing, with millennial pink everywhere. The chocolate was delicious – my favorite had the crunch of pastry inside, as Batiste said, one million times better than a Kit Kat.

a very fancy gift!
Along the way Batiste told us about his city – the Smurfs are from Belgium and celebrating their 60th anniversary, there is a whole “Smurf Experience” you can take. It’s also the mecca for comic book fans and street art – which we saw some of!

A man with a hero 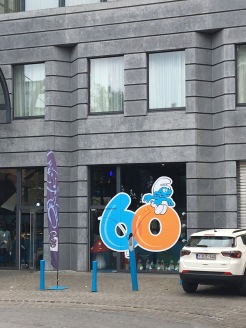 Comics on building
The comics speak to the fact that Belgians have a pretty good sense of humor about themselves. They have been ruled by Romans, Viking, Hapsburgs, Spainards, the French, the British – at this point they just roll with the punches. This also really informs their “national icon” – the Manneken Pis. It’s landmark small bronze sculpture in Brussels, depicting a naked little boy urinating into a fountain’s basin and Belgians adore him. Urban legends circulate but the roots share that he was sculpted to honor a boy called Julien, who resisted one of their many invader’s attacks. Oddly enough, he has over 1000 costumes brought by fans from all over the world, that are ceremoniously changed each week! We saw him in traditional Tunisian garb.
Our last stop had our favorite piece of salted caramel chocolate in the Galeries Royales Saint-Hubert at Meert – a French patisserie with Belgian chocolatiers. It was the most ornate tea room and so elegant!

An Evening of Beer – for obvious reasons…less photos!

We moved on to the “beer portion” and hit four really fun places – Toone (oddly enough, a converted old puppet theater) Benelux, L’imaige de Nostre Dame, and Au Bon Vieux Temps – the oldest bar in Brussels. At each spot, we had a flight of Belgian style Abbeys, Trappists, Lambics, Krieks, Belgian IPAs, Triple Blonds, and Double Browns. He also told us about the “Trappist tradition” – all of which we knew in advance just meant “beer made by monks.” The International Trappist Association designates only 12 as truly “Trappist” – “Achel, Chimay, La Trappe, Orval, Mont des Cats, Rochefort, Westvleteren, Westmalle, Mont des Cats  Stift Engelszell, Zundert (NL), Spencer (USA) and Tre Fontane (IT).” For my US friends, Spencer Brewery is outside of Worcester, Massachusetts.
To be an authentic Trappist product, the monks and nuns producing the item must live the rule of Saint Benedict, to abide by “Ora et labora” (prayer and work) . They must develop products which provide for their own living expenses and help others in need. I found this description at https://www.bov.ch/beer/trappists.html:
After dinner, on Batiste’s recommendation, we hit Chez Leon for mussels. He reminded us to be cautious – there are designated blue plaque signs that are trusted by the Brussels officials as “safe seafood” spots – fortunately, Chez Leon is one (forgot to take a photo!) – it was a great finish to an excellent tour.
We were up early for an 8:10 flight and were back in Geneva by 10AM. In Philly, you couldn’t get to from downtown to the PA turnpike that fast! Needless to say, we are enjoying the close proximity to so many fun spots. Coming up next, a gorgeous mini-stay in Bruges! More beer, chocolate, and frites to come – and a waffle showcase!