Skip to content
After visiting Neuschwanstein Castle, our German road trip continued onward to the Insta-famous town of Rothenburg ob der Tauber (which means, “red fortress above the Tauber river” in German!)

This is Germany people – beer and brats are the name of the game and the only salad is potato salad. If you have a sweet tooth, worth trying a schneeball (German for snowball) pastry! Didn’t rock our worlds, but we happily shoulder the commitment to snack locally. 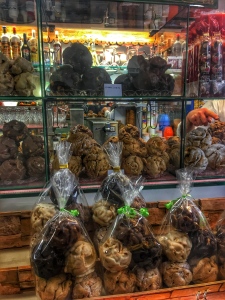 You can get a great traditional meal with a view next to the Cathedral  on the patio at the Reichsküchenmeister Hotel’s restaurant. 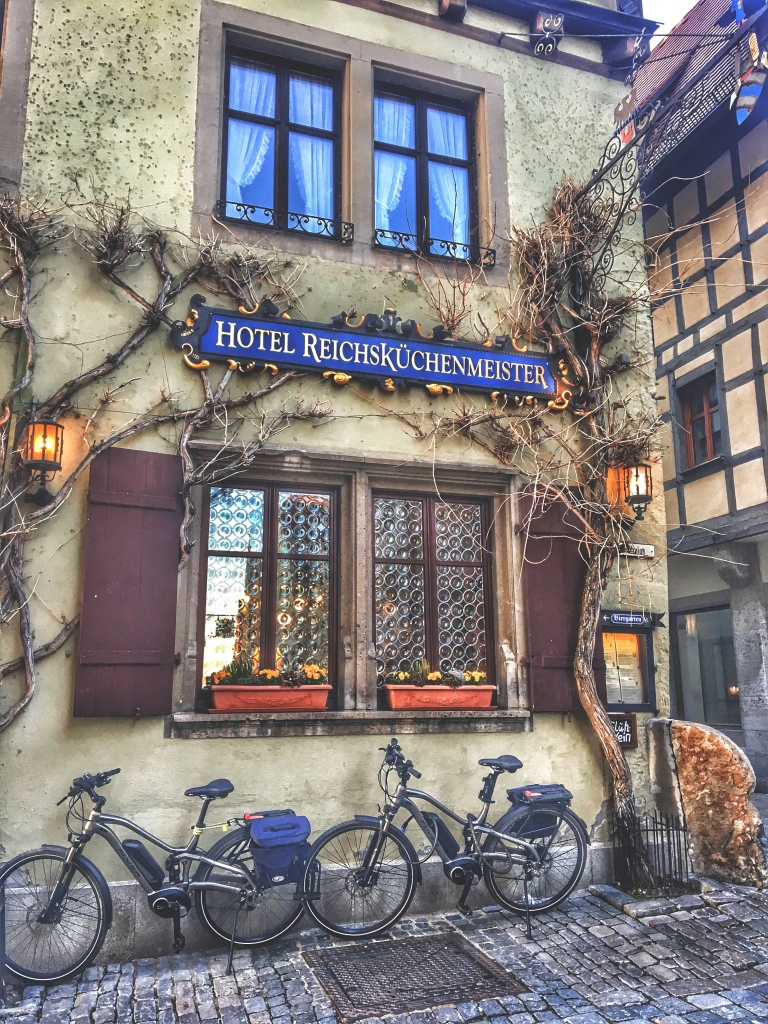 Most hotels in Rotenberg require a two night stay minimum. The AirBnbs in the area are a little sparse but worth a peek!

Wander through the beautiful streets and soak it up! St. Jacob’s Church and St. James’ altarpieces showcase some beautiful woodworking. Be sure to get an ornament at the bombastic Käthe Wohlfahrt’s Christmas Village.  I am one of those crazy Christmas people and for years have collected ornaments from every special place I’ve visited and this shop was one for the books!
If you’re staying overnight, we’ve heard wonderful things about the Night Watchman Tour.  And in the high season summer, staying overnight sounds like the only way to play it to escape the endless drove of tour buses!

I mentioned that my family is very passionately German in my previous post – my mother-in-law has diligently traced her ancestry, calls her first Oktoberfest the greatest day of her life, and as a result, has had the opportunity to visit this beautiful country on a few occasions.

On one such visit she and my father-in-law took a too-short day trip to Rothenburg ob der Tauber and vowed to come back again. We were thrilled to see this gorgeous town which, while a hot, hot, hot spot for tourism, is always raved about as a must-see in Germany. So we decided to continue on the Romantic Road another two and a half hours up north to see it for ourselves! An item of note, there are quite a few Rothenbergs in Germany – be sure you have the right one (Rothenburg ob der Tauber) in your GPS!

Like a lot of medieval European cities, Rothenburg was, and remains, a walled city. You can walk the walls (about 2 miles in total- unfortunately we did not do this!) with lots of exit routes if you want to cut it shorter. It has the most charming little cobblestone streets that felt like stepping back in time – and it sort of is! You can take a peek at the famous clocktower from 1895 in the Plönlein (Little Square) which looks exactly the same today (was under a bit of construction when we saw it!)

Check out the contrast with the photo on the left!
And because Walt Disney is becoming the theme of the blog (see here, and here and more to come in an upcoming post about Copenhagen!) Rothenburg is also rumored to be Disney’s inspiration for the little town in Pinocchio. Scenes in the final Harry Potter movies were also filmed here! (parts one and two)
The first recorded settlements of the area date back to 950 AD and it was once one of Germany’s largest cities (now far surpassed by Munich, Berlin, and Frankfurt, among others!) but was reduced to poverty mostly as a result of the 30 Years and Napoleonic Wars. In the 1860s, it was “rediscovered” and began to thrive again until World War II, when Germany was desperate to accelerate tourism and began assembling the Romantic Road. In the war, nearly 40% of the city was bombed, however, General John McCloy’s mother had a fondness for the city, having visited there herself, and he brokered a negotiation to save it from total destruction. As a result, he was named an honorary citizen of Rothenburg.

You get why he wanted to save this place, right?! 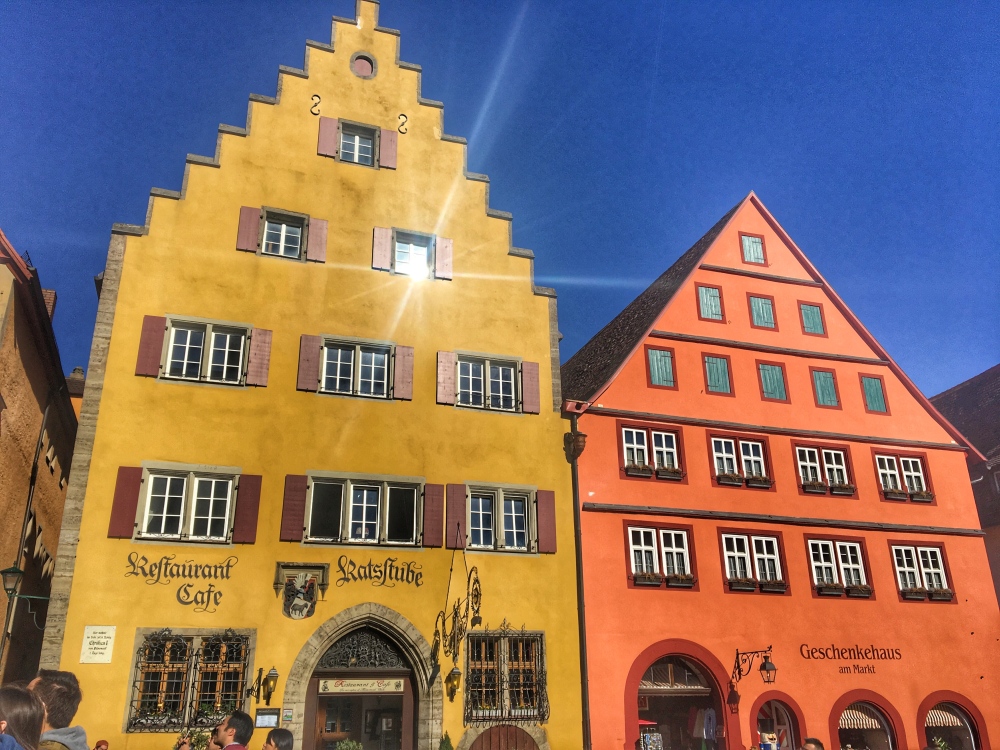 We visited on a supremely sunny day, and the colors were really special. 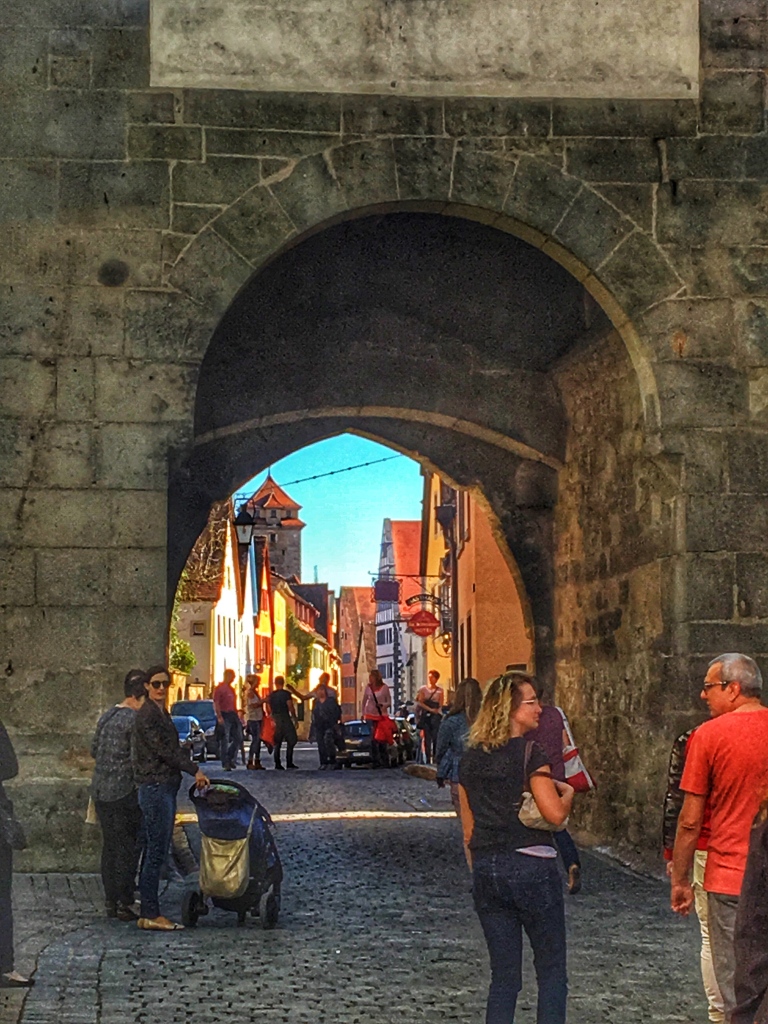 The timber houses in the town square were more than spectacular! 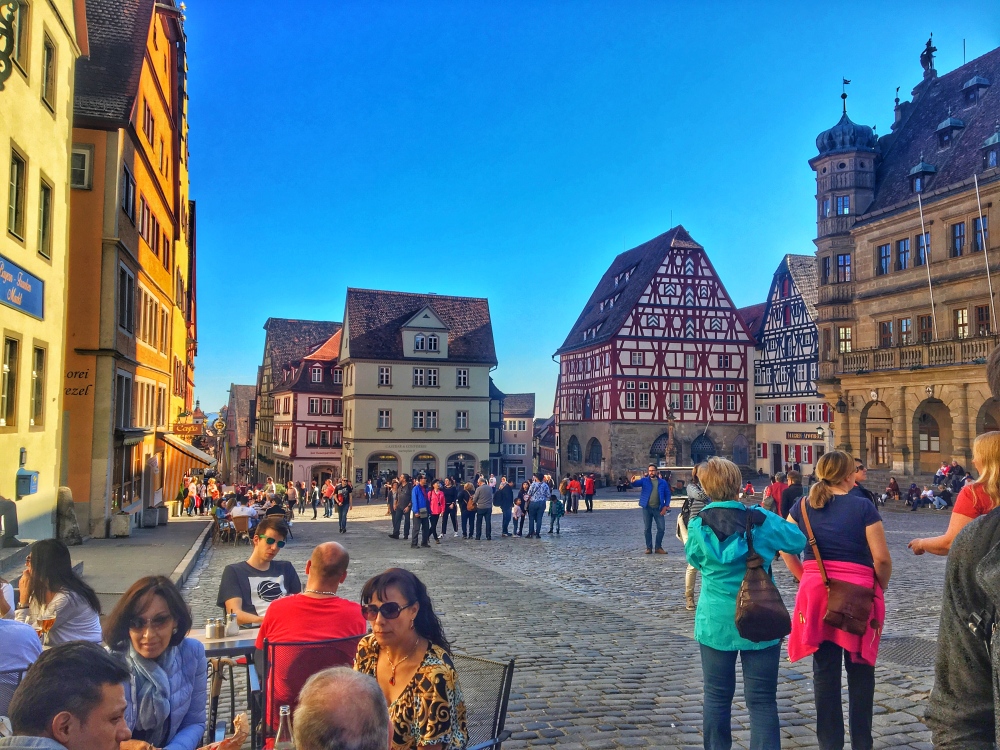 More color each and every time we turned around. 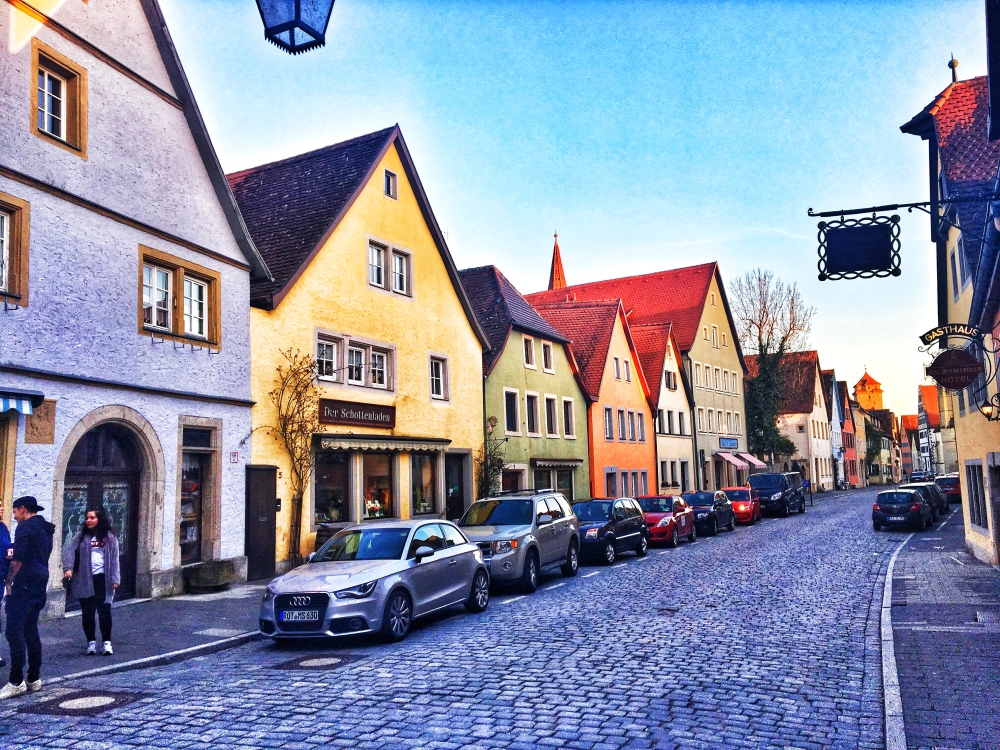 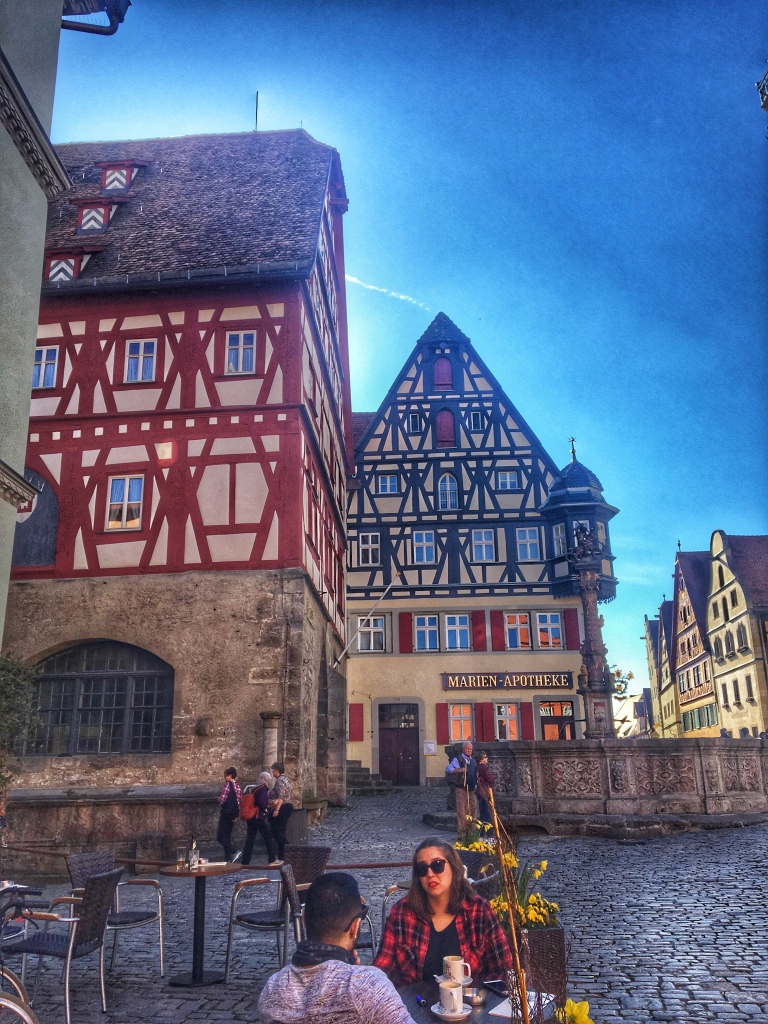 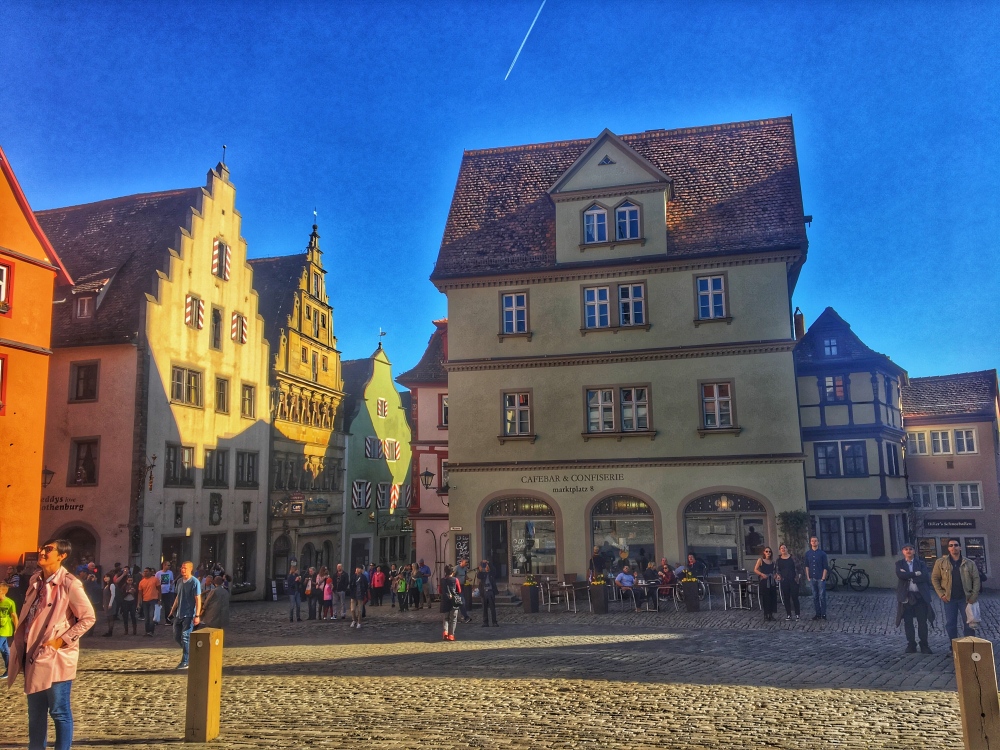 We visited in April which had some buzzy activity, but was not as packed as it can be in the off season – Rick Steves told us 2.5 million people visit each YEAR!
We had a lovely dinner, tried a snowball, and set back to our Airbnb for an earlier night.
The next day, we finished our drive down the Romantic Road and set off for our next stop – Budapest!

My first visit to Germany was incredibly picturesque and full of laughter and I’m so glad to have experienced it with our awesome family – and of course, Walt Disney!