With just five days in Geneva under our belts, we set off again and took a ~3 hour train trip to Zürich for orientation meetings. I’ll write a post sharing a bit more about this, part of what makes Switzerland so fascinating and so complex, is that there are four official languages –  German, French, Italian and Romansh (a language somewhat descendent of Latin.) We are living in predominantly French speaking Geneva, and Zürich is in the German area. Embarrassingly enough for Americans, many people speak more than one of these languages. It has truly motivated me to get into French class very soon!

Neither of us had been to Zürich before and we had almost no expectations of what it would be like – just a bunch of banks? However, we had heard really wonderful things from family members and were just generally very excited to explore a new city. Armed with recommendations from our dear cousin M, who spent a secondment in Zürich , and a few expat blogs, including Just Moved to Switzerland, we set off!

The train ride by the way, was gorgeous. Very different than my normal Amtrak Northeast Regional cruise up the Jersey turnpike. Say hi to my friend C oohing over the Neuchâtel Castle.

The Beast from the East was still live at the Zürich  train station when we arrived. 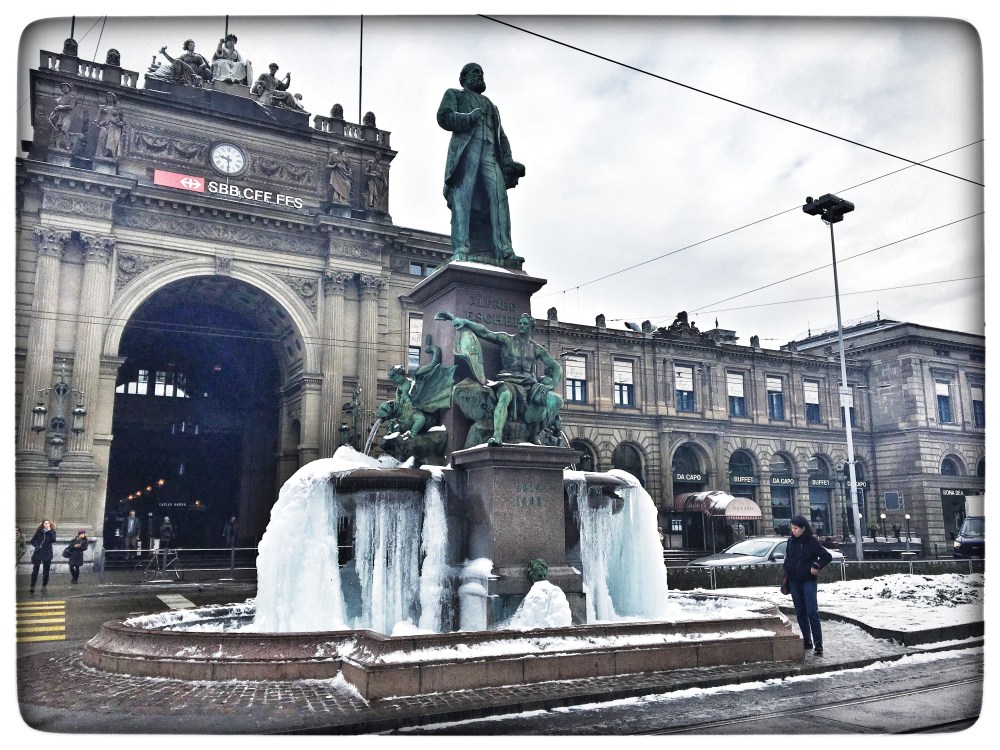 Our first evening we arrived hungry, and mostly thirsty, and visited a friend’s recommendation Zeughauskeller near Paradeplatz and the Fraumunster Church. The restaurant was built in 1487 (as the menu pointed out and is worth sharing here – before Columbus even set sail, people) first as an armory, and in the 1900s became a restaurant and social space. The food was predictably German and awesome. 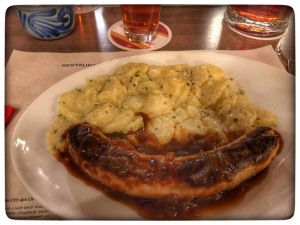 The next morning, after waking up at the lovely Reniassance Marriott (you’ll notice this will be a recurring theme in most trips – which Marriott we pick) armed with the essential, I decided to spend my day wandering and could not believe how charming and fairy-tale like Zürich  really was.

I went in to the Fraumünster (Church of Women) for a free audio guide (in English) costing just 5 CHF (Swiss francs.) Most people know it as the “church with the Chagall windows” but it goes back all the way to 853 (again, take that Columbus) when it was built by King Louis the German for his daughter Hildegard. Chagall, an expressionist painter who had never attempted stain glass, completed a rosette and a series of five beautiful windows that were installed in 1970, when he was over 90 years old. You are not allowed pictures but if you are interested – check them out here!

The next day, I was particularly eager for a bit of balance from brats and checked out vegetarian buffet restaurant Hitl – which has about a million locations in Zürich and calls itself Europe’s FIRST vegetarian restaurant. I was so pleasantly surprised by how many offerings they had on the buffet and they had a huge variety of teas, smoothies, and wines available all day.

I wandered in to their location just over the Bahnhofstrasse (one of the most expensive retail streets in the world – up there with 5th Avenue and Rodeo Drive) and arrived in that awkward place before lunch and dinner (got lost on those topsy turvy streets!) I worried they might not be open during the lull – but the place was still PACKED inside. They had lovely outdoor space that I am sure is full during the summer- looked like the perfect place for a shower or cocktail party! 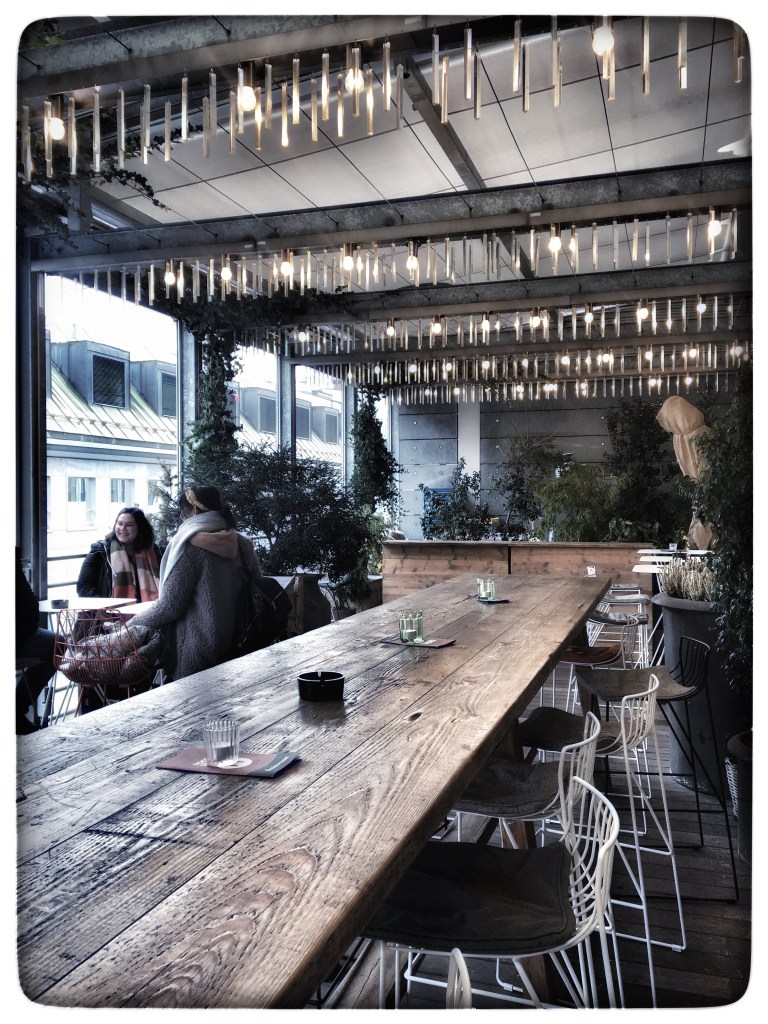 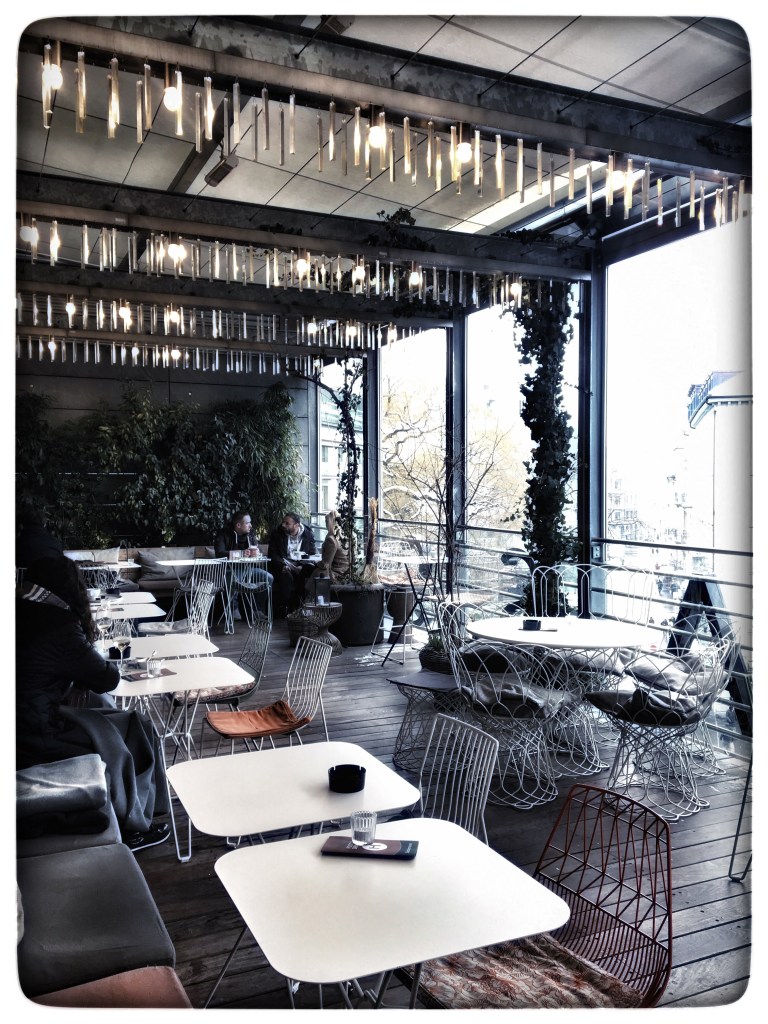 Also famous in Zürich  is their macaroons called called luxemburgerli at Confiserie Sprüngli. I did resist but am sure I will be at their Geneva location very soon!

The following day, I was able to take advantage of one of Zürich’s great assets – free walking tours 365 days a year that meet each day at 11AM at the Credit Suisse at the Paradeplatz (just tip your tour guide of course!!) My guide was a university history student, Jonas, who was very kind and knowledgeable.

He showed us the outside of Fraumünster and shared that it spent many years as a convent where the abbess actually had a great deal of power in town and even selected the mayors herself, but they were later replaced by nobility and the guilds. It took way too long for women to gain a voice back in – sadly, women were not granted the right to vote across every canton in Switzerland until 1971!

The guilds (butchers, bakers, candlestick makers abound) threw out the ruling class and took control of the city. They still exist today, in the form of “old boys clubs” with two right near Fraumunster. Sadly – there are no official female guilds yet. One is emerging but has not been granted “official status” by the city.

If you’re wondering about all the empty chairs – until a few years ago, these squares were all parking lots. The city decided to invest in community projects, removed the lots, made the areas car-free for residents to enjoy. Jonas assured us in the summer they are packed with people during lunch or happy hour.

Before we left the square, Jonas showed us a plaque commemorating a famous speech from Sir Winston Churchill following World War II (in which you might recall Switzerland was technically neutral, but its involvement is very complicated.) Churchill proclaimed “Let Europe Rise” and the square was packed – you can see images here.

Jonas shared that each spring, Zürich has a festival that is sort of a US “Groundhog Day” spin called Sechseläuten. Each third Monday of April, the guilds all parade down the main streets – the baker guild gives out bread, the wine guild gives out glasses of wine, the fish guild fortunately just gives out chocolate fish, and they all meet in a square where the “Böögg (an 11 foot snowman) is waiting. He is lit on fire and the faster it takes for his head (which is filled with fireworks) to explode- the more beautiful a summer it will be. You can learn more here. Really weird – but not weirder than Puxatawney Phil I suppose?

From Fraumünster we headed to St. Peter’s Church – which has the largest clock face on a church in Europe (larger than Big Ben!) and has a famous watchtower in the spire. It is no longer used, but the position of watchman kept a careful eye on the city and was able to point out fires with a red flag to the Middle Ages version of a fire department . As a result, Zürich  was one of the only cities in Europe to avoid any major destruction from major blazes.

If you’re following along on Instagram, you will have seen this other photo of St. Peter’s hiding in the cozy streets! 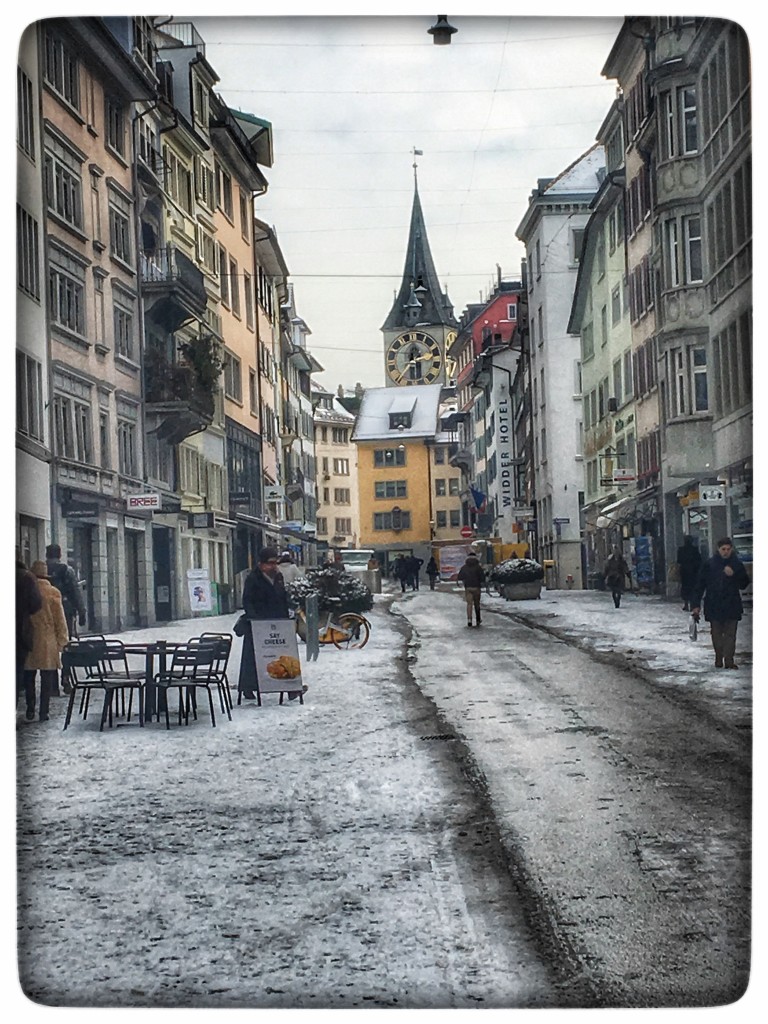 From there walked up to Lindenhoff Park, where Jonas said given the expense of Zürich, he and friends often come up in the summer with bottles of wine and just enjoy the view. In the distance, Zurich’s two main universities can be seen – on the left, is the “STEM specialist” ETH college where Albert Einstein once taught, as well as the inventor of X-ray. Next to it is the University of Zürich, more focused on the humanities. 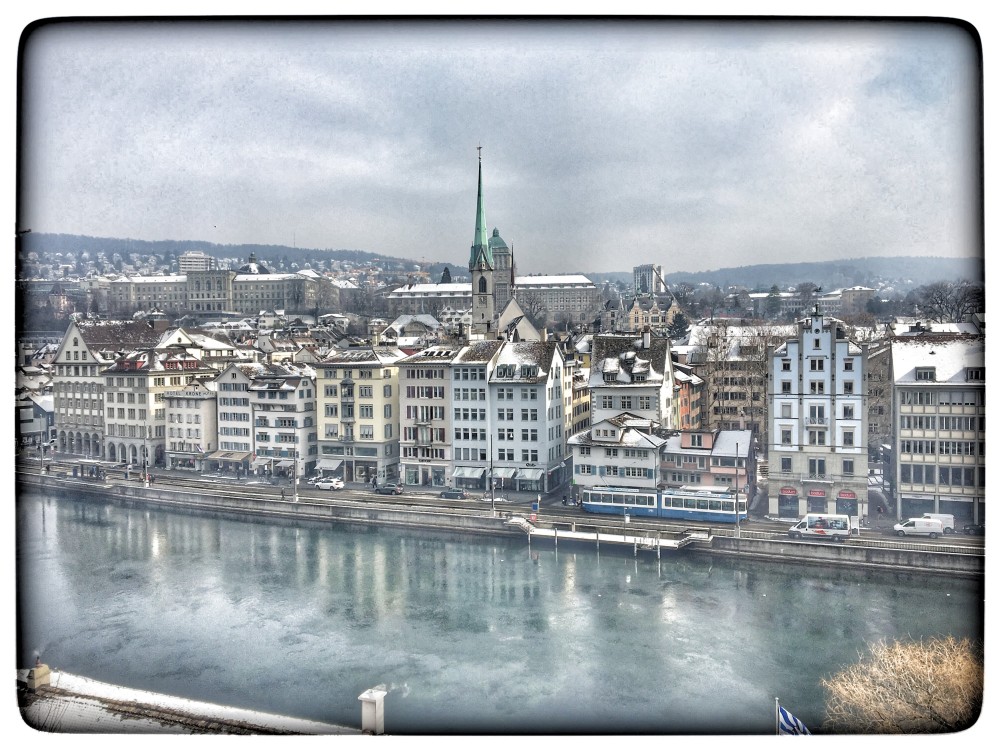 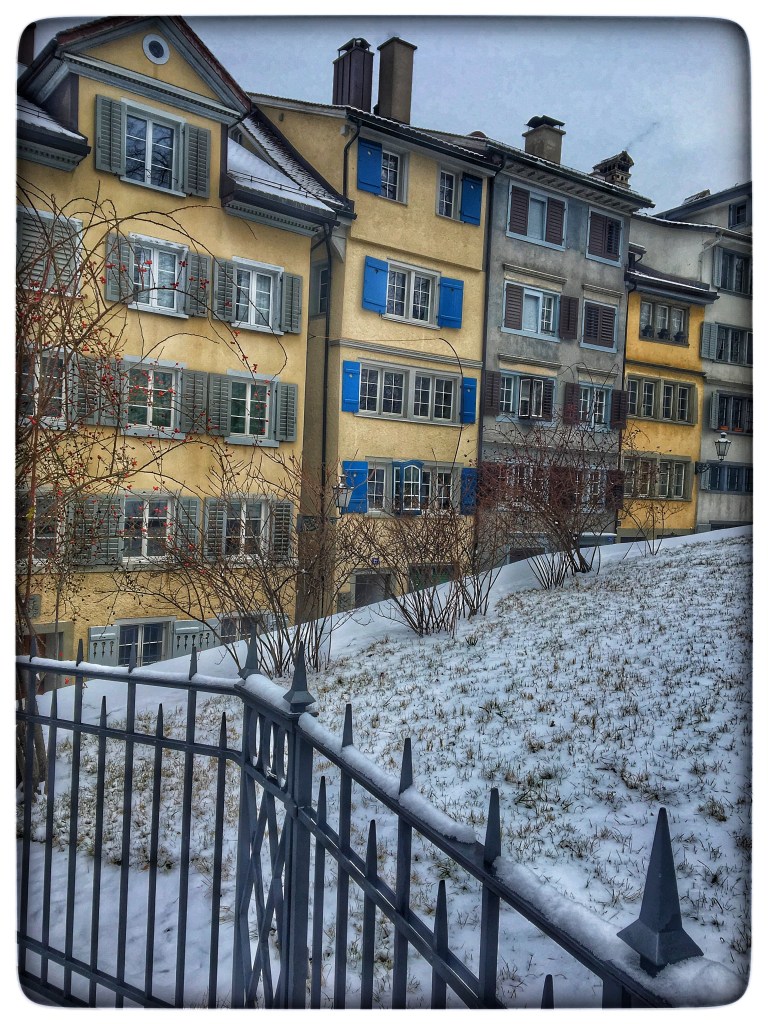 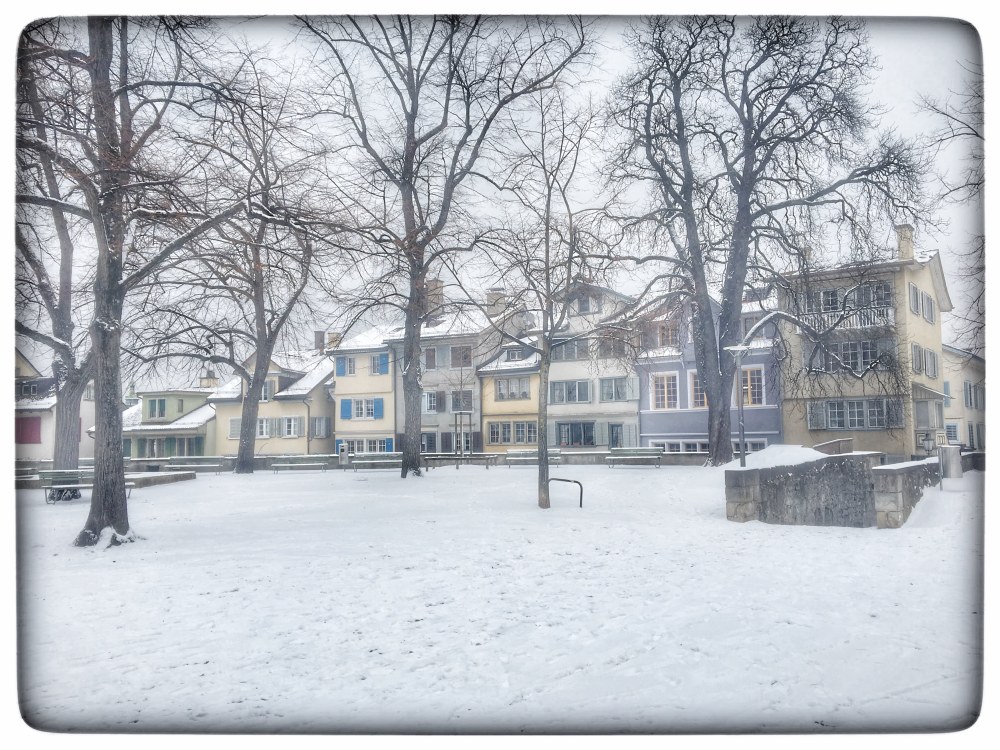 There is also a statue commemorating a female warrior from the Middle Ages. In a conflict with Austria, the men were tricked to go fight outside the city, and the Austrians planned a sneak attack on Zürich. To scare them off, the women went to the front lines dressed in armor, and the Austrians ran the other direction. To this day, the Swiss tease the Austrians for being afraid of all of Zürich’s mighty women. And still they wouldn’t vote for hundreds of years!

We crossed the river and were unable to visit the Grossmunster Church, built by Charlemagne to honor two Christian martyrs in Zurich, but were unable to go in because they were filming a movie about the most famous Zurich reformer, Ulrich Zwingli, a contemporary of Martin Luther. Imagine it will not be coming to theaters.

After the tour, I warmed up with a perfect hot chocolate and a quiche Lorraine in this cafe – a fantastic Easter explosion recommended by cousin M and by Jonas!

After warming up I took a stroll in the snow to enjoy views of the gorgeous Zürich Opera House! Such a treat.

We enjoyed our last night in a bar with a wonderful bartender dressed in lederhosen, and the most adorable band playing accordions and bass.

And on the way home, we saw some gorgeous views of the Lavaux Vineyards on the train all done up in snow. Can’t wait to visit when it all thaws out!

The bottom line – Anyone who tells you Zürich is just a banking town and not worth a visit is being VERY short sighted. It is SUCH a charming place, and we hope to visit again very soon!

Tonight we leave our first Europe ski trip – a weekend in Chamonix, France with some friends! We found a great VRBO and are renting a car for about an hour drive. We will be back Sunday and I will post a recap next week!